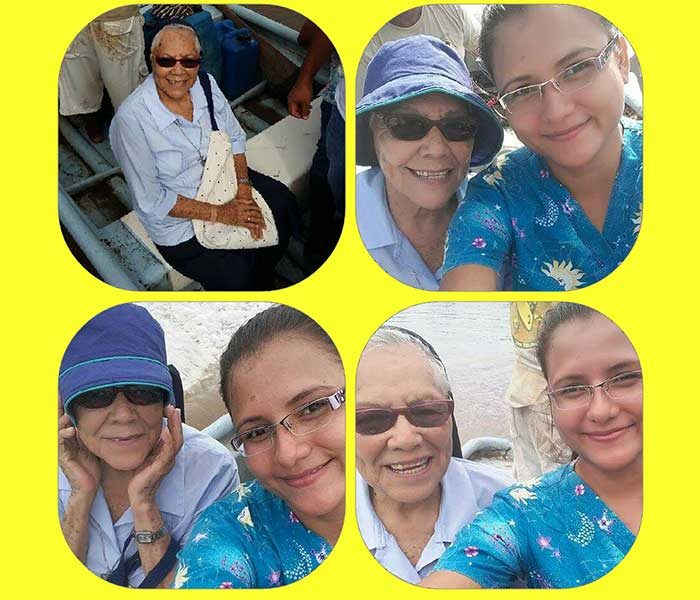 You cannot imagine the joy and excitement when these photos arrived. During a medical mission trip on the Rio Coco (Coconut River) between the Central American countries of Nicaragua and Honduras, two wonderful people.

I know met on a traditional Miskito dugout canoe. Adelante Mujer Doctor Ana, featured in a previous blog  met Sister Mirna, a Sister of St. Agnes and midwife who has assisted in the delivery of more than 200 babies in remote areas along the Rio Coco and in Waspam, Nicaragua.

Ever since I entered the convent I have heard about the Rio Coco. For the same many years, I heard about the work of our Sisters in the secluded areas of northern Nicaragua. I heard about the poverty and the lack of medical care in isolated regions. I heard how Sister Mirna would train local women to help with the birth of babies when she herself could not be there because of the distance between their villages and where she lived in Waspam. I learned that Sister Mirna worked at Casa Materna in Waspam to which she would bring at-risk pregnant women from remote areas because she, nurses, and a doctor at the Casa could give them and their babies a better chance of survival.

And now a new, young Adelante Mujer Doctor Ana is witnessing the experience and service of a midwife Sister Mirna. In a tree-hewn boat they traveled the Rico Coco together to minister in places so new to Doctor Ana and so familiar to Sister Mirna. They visited, they laughed, they took pictures for us to share with donors and friends. This doctor and this midwife are committed to bring better health care to people in such dire need. And they had the opportunity and the blessing to do it together…on the Rio Coco!