I was born in a small village in Nicaragua just along the border of Honduras. Named Catherine Elizabeth Levy Wilson, everyone calls me Kathy. I was the second of five children, two of whom were born with disabilities and are the angels of our family. With them our family learned to accept and love others just as they are.

My great grandfather on the Wilson side of the family was a Moravian pastor who dedicated his life to serve God and the indigenous peoples of the Caribbean coast. The son of this pastor and my great grandmother became the first bishop of the Moravian Province Nicaragua-Honduras-Costa Rica. Their grandson became the second bishop. He is my mother’s brother. Religion and service have always been a strong part of our family. 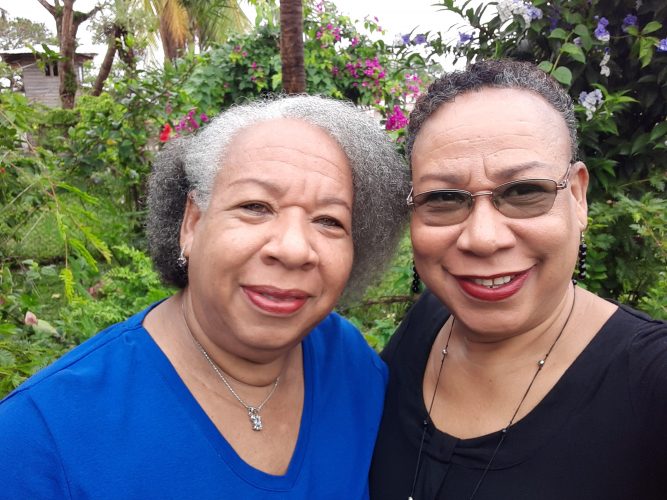 Kathy with her sister, Dr. Florence

The Levy side of the family is from Bluefields. My grandmother died giving birth to my father so he was raised by his grandmother and eldest sister whom I loved dearly because I lived with her in Bluefields during the first two years of my secondary school.

My primary education began at the Moravian School in Bilwi, the first two years of secondary school at the Moravian School in Bluefields, and I finished high school run by the Catholic Church where I was able to certify myself as an Executive Secretary. I also studied English before moving to the United States where I got married. I worked in Miami, Atlanta, and in Morton, MS. I returned to Nicaragua to take care of my mom until she died.

After Mom died I went back to the USA but decided to return to Nicaragua shortly after my dad died and my marriage was broken. I helped take care of my brothers with disabilities until they died. This was the time I decided to study at BICU University where I graduated with a bachelor’s degree in Tourism and Hotel Administration.

My employment in Nicaragua was diverse. I was a tour operator, bilingual telephone operator, operations officer for Ministry of the Interior, controller of radio programs, interpreter of English, Spanish, Miskito languages, did assistant nursing, and provided care at Verbo Church orphanage center. I became passionate about being with young people just as I love caring for elders. 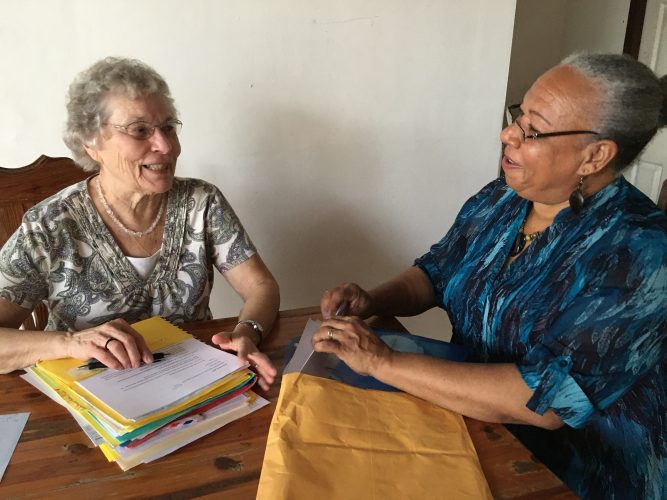 Kathy with Sister Diane in Bilwi

My brother Edward became a mechanic like my dad and my sister Florence became a medical doctor. He specialized in his field in Japan, she in England. They both married and gave me two nieces and two nephews, one of whom I helped raise, and an adopted niece who is now a teenager.

When the previous On-site Coordinator for Adelante Mujer retired, my sister, Dr. Florence, encouraged me to accept the opportunity to serve and contribute to the students’ wellbeing. So I became part of this amazing program that is helping young women in Nicaragua to become doctors who have deep understanding of love and service they are to provide as doctors in their communities. I manage all the distribution of funding from Adelante Mujer to the students and I keep regular communication with the organization in the U.S. Yet, I could say that my biggest work with Adelante Mujer is making sure that all of our students continue always to become excellent doctors.  Adelante!

Blessings to all who are part of this great mission.  My best regards to all.

Semester Two of 2020 has begun for the students of Intercultural Medicine at URACCAN University. Each student submitted the required grade report from the first semester and we are so very proud to announce that 49 of 51 Adelante Mujer students have qualified for funding. Below are just a few of the email messages thanking you for your financial assistance that is essential to their success.  END_OF_DOCUMENT_TOKEN_TO_BE_REPLACED

Due to the current pandemic, our regular meeting room was closed the day before the March meeting of Adelante Mujer Board of Directors. Our gathering had to be cancelled. Voting on important issues was conducted by email responses and business pretty much continued as usual. Then, before the Annual Meeting scheduled in July, it was agreed that an in-person, half day session was less than feasible and, besides, the facility for the meeting was still closed to outsiders. This time a 3-hour meeting by Zoom was scheduled and, gratefully, it proceeded without a hitch. The important ministry of Adelante Mujer goes on without an office to work in and without a meeting room for nine devoted women to discuss business in our familiar space.  END_OF_DOCUMENT_TOKEN_TO_BE_REPLACED

Semester One of 2020 will soon be history for Adelante Mujer students in the Intercultural Medicine program of URACCAN University in northeast Nicaragua.  In addition to attending classes, doing assignments, and helping at the hospital, our students often do volunteer work by providing health care to 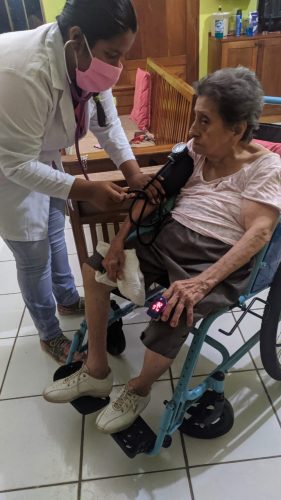 family, neighbors, and needy people in the area.  Below are ventures of our sixth-year students.  END_OF_DOCUMENT_TOKEN_TO_BE_REPLACED 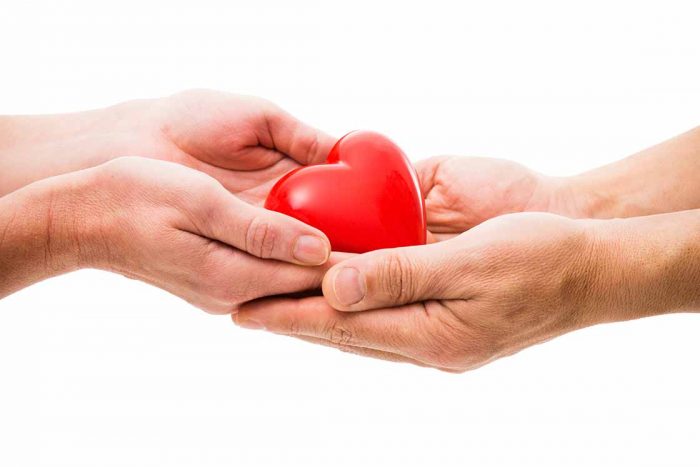 The school year in Nicaragua, unlike that in the United States, follows the calendar year.  When we visited students in December, they were completing the second semester of 2019.  As is our practice, we met with each class of students currently funded by Adelante Mujer. END_OF_DOCUMENT_TOKEN_TO_BE_REPLACED

The accomplishments and successes of most people are often unrecognized during their lifetime. However, on February 20, 2020 the contrary happened. Sister Ann McKean, CSA, the foundress of Adelante Mujer, was featured by the Illuminating Women Project at the beautiful Thelma Sadoff Center for the Arts in Fond du Lac, Wisconsin.

END_OF_DOCUMENT_TOKEN_TO_BE_REPLACED

Here are more heartfelt comments from our newest Adelante Mujer medical students. They were accepted into the program after interviewing last May and submitting all of their previous grades. An 80% GPA is required for admission and our continued support. END_OF_DOCUMENT_TOKEN_TO_BE_REPLACED

We hear how thankful the students are, but you don’t have the same opportunity. You deserve to receive the gratitude since the support is coming directly from you, the donors. Below are some comments from the most recent applicants who have been accepted into the program. The thoughts are from the heart, the translation from Google.  END_OF_DOCUMENT_TOKEN_TO_BE_REPLACED

When people donate they usually want to know two things: Is my money going to the cause I want to support and do recipients appreciate what I give?

The reply to the first concern is a definite “Yes, every penny of every donation is used to help young women in Nicaragua who are studying to be medical doctors. Every penny.” END_OF_DOCUMENT_TOKEN_TO_BE_REPLACED 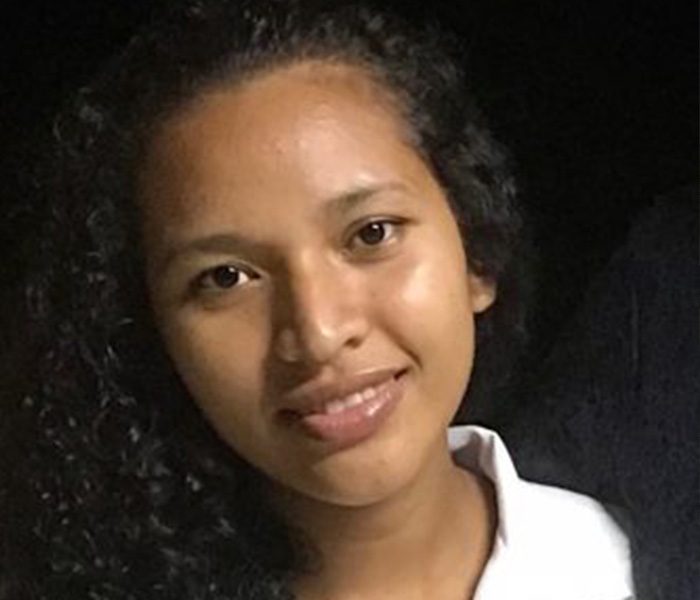 *A note written in September 2017 by Sayonara in her academic year 5. Translated by Google

I hope you are well, I am very pleased to greet you. I send greetings and thanks to all of our donors who make it possible for us scholars to continue studying and continue to help needy women. END_OF_DOCUMENT_TOKEN_TO_BE_REPLACED