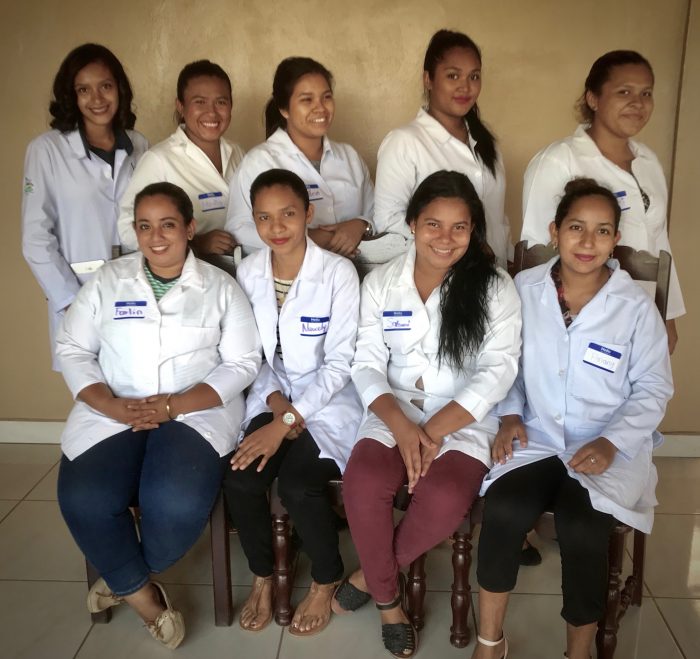 May 17, 2019 was the first day of our semiannual trip to Nicaragua. After a full day of travel we arrived in Managua after 1:00 a.m. We planned to board a plane to Puerto Cabezas the next morning, so it was a very short night’s rest. Once settled into our hotel there, we prepared for our first class meeting.

It was with the 6-year students. We met in an open-air room on the 2nd floor of our hotel at 4:30 p.m. Sister Diane mentioned that this might be our last meeting with them because they will likely be continuing with their studies in Managua when we return in December. We’ve known most of them since they began this journey. Now they face their last year and they shared their thoughts with us. It was pretty well agreed that had it been possible, they would have liked to have had more training in radiology. Hopefully such courses will be available in the medical school’s future. For now it is still a relatively new program, celebrating its 10th anniversary, Adelante Mujer having been involved nearly from the beginning. Sister Diane reminded them that, as medical doctors, they will influence the communities they serve. She suggested they use their influence to help direct the future of the medical program. They listened with intense concentration. These women will do more than heal the sick; they will be symbols of hope in general.

Before we said good-bye, Farlin addressed Sister Diane. The Sisters of St. Agnes had influenced her entire life, she said. Sister Raymond and another Sister were there when she was born. The Sisters were her teachers until she began her medical training when again they were there with financial and moral support. Sadly, the presence of the Sisters in the schools has become a thing of the past. You, the donors now carry on the work of supporting their medical education.

The light was fading and we wanted to get one last photo of the class before it became too dark, indoor lighting being too dim. We said good-bye to these remarkable women with a touch of sadness, extreme pride, and confidence that they will make a huge difference in their communities. They asked us to extend their gratitude to you, the wonderful donors. Without your help, they said, their lives would be quite different, and not for the better.