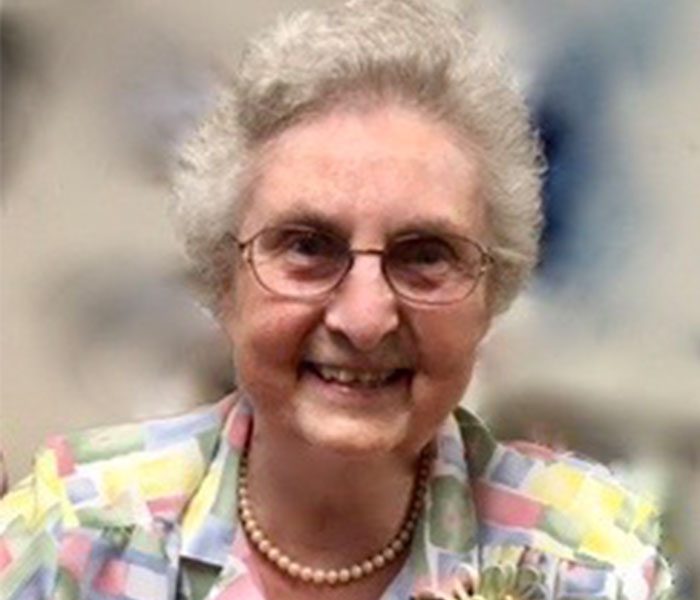 We are dedicating this blog to our foundress, Sister Ann McKean. We celebrate her 60th year as a Sister of Saint Agnes on August 15, 2017. Sister Ann’s background includes teaching in colleges, universities, and even a Catholic seminary. She has held the title “senior professor of theology.” Her subjects have included Sacred Scripture, women’s studies, world religions, and anthropology.

In her work she has traveled extensively. Health challenges have included a knee replacement and breast cancer. She was cancer free for over 20 years but then battled kidney cancer, breast cancer and then leukemia. That was followed by a heart valve problem resulting in open heart surgery.

I would rather focus on Ann McKean, the person behind all these accomplishments and challenges. What motivates her? What is her personal story?

Sister Ann did not grow up Catholic. Already as a child, she was curious about religion so, during high school, she began searching while active in her Methodist United Brethren Church. She signed up for classes in the Catholic Church and would ask the same questions of other religious persuasions and compare the answers. Eventually she decided that the Catholic Church made more sense. Much to her mother’s dismay, she chose to be baptized in the Catholic Church. On that day, August 1, her 18th birthday, she became a Catholic.

I’ve learned in my brief acquaintance with Sister Ann, that she doesn’t do things by halves. She didn’t just join the Catholic Church; she became a nun, choosing to dedicate herself completely to the love of God and God’s people, taking vows of poverty, celibacy, and obedience. It was not an easy life, especially in the early days of convent living. She loved teaching, especially theology. One highlight for her was being a United Nations representative at the 1995 UN World Conference on Women in China.

When I asked Sister Ann what made her think she could start an organization like Adelante Mujer at an age when most people are enjoying retirement and when her health was none too good, she just replied, “I did it because I thought I could and women in Nicaragua were badly in need of help.”

When her health deteriorated to the point where she could no longer travel to Nicaragua herself, she felt very discouraged. One day, however, she understood when she recalled the following passage of St. Paul in 1 Corinthians 3:6: “I planted the seed, Apollo watered it, but God has given the increase.” That gave her an understanding and acceptance of the part she played in starting Adelante Mujer. She still devotes long hours to raising money, communicating with the students, and overseeing Adelante Mujer.

Sister Ann is living a life that most of us admire, but would never aspire to imitate. Nevertheless, she has created a path for us to follow. If you wish to join her in her latest, and maybe most enduring mission, we invite you to help “water the seed” she has planted, by making a donation to Adelante Mujer/Advance Woman!  We know that God will surely continue to “give the increase!”